One of the highlights of the lead up to New Zealand Fashion Week has been the collaboration between BMW and NZFW New Generation designers this year.  It was the first ‘official’ event for NZFW that I have been too and it was lovely to have all my favorite fashion people around, some budding new talent and some sleek machinery to boot.  As you start to return to NZFW each year, you begin to realize the really exciting bit is not just seeing what the strong solid designers you love are bringing to the table, but what new designers are coming up with.  We forget that there was a time when Karen Walker used to sell at the markets, and I still remember when she first started selling the fabulous trousers she made with a split up the back of the almost bootleg pant and white shirt that every fabulous girl in Auckland wanted to get her hands on.  And she is now an NZ designer with international recognition… so there is a certain excitement about seeing these group shows. With last years alumni already moving onward and upward, Deryn Schmidt is now showing solo this year at NZFW, Egoist now have their own store and Katie-Marie Cole’s clothes is stocked in stores around NZ. Maaike (from New Gen 2010) also have a store of their own in Auckland called Maaike & Co, and Riddle Me This (New Gen 2010) is stocked in stores around New Zealand. I have already had the pleasure of seeing Dmonic Intent at NZFW and this year they will be showing not once, but twice.  Not only will they be showing with New Generation designer show, but also with Miromoda two days later.  When I spoke to them briefly at the unveiling of the BMW collaboration, the three sisters Maxine, Kris and Samara and their brother Joe, were very excited about the prospect and instead of being worried by the task (getting all those different garments ready), they were trying to work out how to get some EXTRA garments into the shows… Their collaboration with BMW creating the Ultimate Style Icon was my favorite of the four.  They had taken their usual, unusual approach, and had used maori weaving imagery as their starting point.  Bold and graphic, it suited its transference onto the body of a car well.  They were the only ones that chose not to put their name on the vehicle, thereby making sure their design didn’t overwhelm – it was a great balance.  I assume BMW took note.

Arielle Mermin took her own inspiration of Californian Romanticism/American Vintage from her Some Girls A/W 2013 collection as well as using the BMW symbol and came up with a whimsical design that worked well, especially when you could see it up close.  The soft color palette and organic design was pretty spot on.

Yujla Wang from Silence Was… designs with an “updated concept of bespoke tailoring”, modern-day classics with a gentle twist that you would keep wearing again and again.  Her eye-catching red pattern over the black bodied BMW certainly has more than a gentle twist, and when I saw it parked in Ponsonby later in the week, is certainly not a design that is easily missed.  I am a complete sucker for red and she used the color to great effect. On a personal note – I just LOVED the blue jacket and pants that she was wearing, loved the color and the collar detailing.

Vanessa Kim from Daniel K has added a ‘scarred’ effect to her BMW that echoes in her A/W 2013 collection for NZFW Ombres Chinoises. It would appear that the pattern was lifted from a fabric she is using.  The silver/grey of the BMW worked well with the caramel scarring effect over the top.

All four labels will be showing at NZFW on Wednesday 5 September in the Westpac Tent showing their collection of nine silhouettes each.  If these BMWs are anything to go by, we are really looking forward to seeing what they come up with.

Dmonic Intent and their BMW collaboration 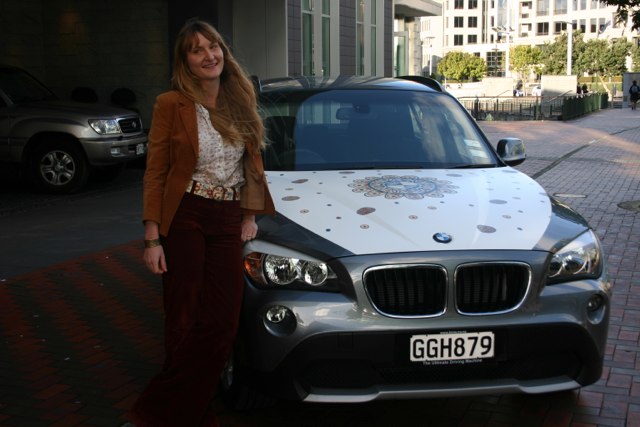 Arielle Mermin and her BMW collaboration 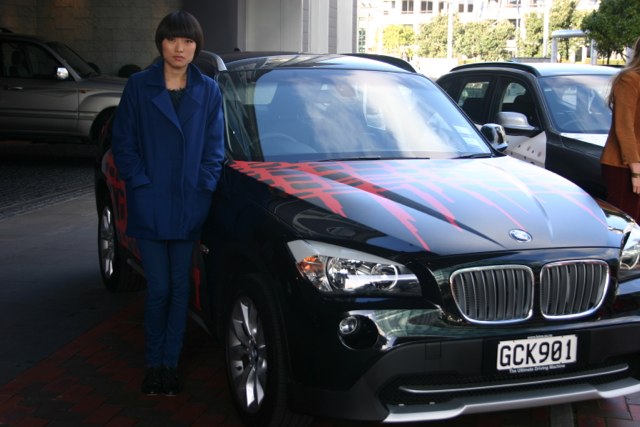 Yujla Wang from Silence Was and her BMW collaboration 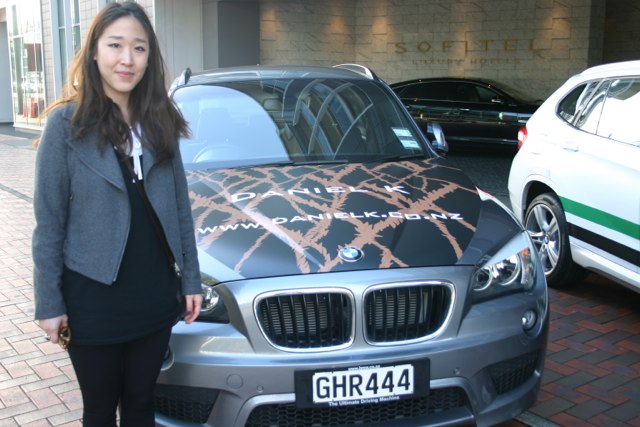 Vanessa Kim from Daniel K and her BMW collaboration